ASDA shoppers have been sharing mixed reviews after the supermarket chain decided to ration its Just Essentials range.

The Sun exclusively revealed the grocer was reducing the amount of items customers could buy from its budget range.

Consumers can buy no more than three of the same item both online and in-store.

There is however no limit on the overall number of items you can buy, so if you purchase three beef lasagnes you can still get three bags of tomatoes.

Asda said it had been forced to put the restrictions in place because the range was proving so popular and stock levels were low.

But shoppers have shared mixed reviews of the supermarket giant’s decision to limit buying at a time when many are struggling through the cost of living crisis. 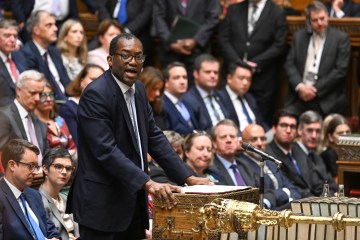 Everything you need to know in £45bn mini budget – how does it affect you?

Posting on The Sun’s story on Facebook, some said the rationing meant they couldn’t buy enough to feed their families.

One customer said: “I think it’s stupid. I have five kids and wanted four packs of noodles and a pot of pasta and was told I can only get three noodles.

“As a family of seven we often buy more than three of the things. Not to be greedy, just to feed our family.”

Another said: “I’d have to do two separate online shops within the same or two days to get enough food for the week.

Most read in Money


Everything you need to know in £45bn mini budget – how does it affect you?


Stamp Duty cut to save homebuyers thousands of pounds


Universal credit changes explained: How the Mini-budget announcement affects you

“As a family of seven we use two on most things for just one meal. Will probably not use them anymore.”

While one shopper added: “Now my shopping just became a nightmare since I have a large family I now have to do multiple shops instead.”

Not all customers think Asda’s decision to limit the Just Essentials range is a bad idea though.

Some said it was a good idea if it meant there were enough products to go around all customers.

One said: “Good idea, as when I was in Asda this woman literally had a full trolley full, bulk buying.

“Understand some people are massively struggling but leave some for other people.”

While another said: “This is good. Every time I go to Asda to do a shop I see many people filling up their trolleys with multiples and leaving none on the shelves for anyone else.”

One person added: “I thought it was three items altogether but it’s just three of the same product so it’s not too bad.”

An Asda spokesperson said: “Just Essentials is proving really popular at the moment and we’re working hard to get the out of stock products back on the shelves as quickly as we can.

“To make sure as many customers as possible can buy these products we are temporarily limiting purchases to a maximum of three of each product.

“This will be for a short period and we will let you know as soon these limits are removed. We are sorry for any inconvenience this may cause.”

How else can you save money at Asda?

There are a number of other ways you can save on your Asda shop beyond buying the Just Essentials range, if you know how.

One TikTok user, known as “Chloe’s Deal Club”, revealed how to save £25 at the supermarket chain through the Uber Eats offer.

But that’s not all, here are some other ways you can save while at the supermarket.

Asda has a number of products on sale with “Rollback prices”.

The chain claims to reduce the price of thousands of its products, from laundry and household products, to pet stuff and kids items.

Websites like hotukdeals show up when Asda is rolling back on its products as well.

One canny Asda shopper claimed to have got £712 worth of products for just £60 during one visit to their nearest supermarket.

We checked out some products online to see how much you might get off.

Of course, you should always bear in mind a sale is only a sale if you already wanted that product and it’s not worth buying something for the sake of it.

Look out for stickers

You should look out for yellow stickers as well – put on products that are reduced to clear.

It’s not just Asda that puts stickers on items due to go out of date either.

Morrisons, Tesco, Aldi and Sainsbury’s all reduce their products to clear. To find out more, you can read our guide.

Buying reduced items can see you get up to 75% off in some cases.

Asda, like lots of other supermarkets, offers its own loyalty scheme – where customers can build up points every time they scan through their shopping.

These points can be exchanged at a later date for goods, instead of your hard-earned cash.

Asda first launched its loyalty scheme back in October, 2021, trialling the scheme in 16 stores.

It’s since been rolled to all 633 of Asda’s UK stores.