Following the recent departures of Pierre-Emerick Aubameyang and Alexandre Lacazette, he is desperate to bolster his forward line with the Brazilian.

And it seems that Arsenal are ready to meet City’s £50m asking price for the Samba star.

However, now the Daily Mirror claims that Spurs are attempting to hijack the move.

They state that their boss “Antonio Conte has made a move to shatter negotiations” by offering Jesus Champions League football next term. 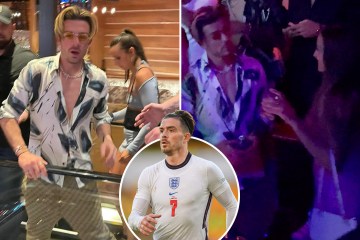 They pipped their North London neighbours to a top four finish last season, condemning Arsenal to the Europa League.

Now they could be about to deliver another crushing blow to Arteta if they land the City ace.

The versatile Jesus is equally as comfortable playing wide or centrally in attack and has scored 95 goals during his time at the Etihad.

But he knows his chances of regular action will be limited following the arrivals of Erling Haaland and Julian Alvarez at City.

PLEASED TO SEE US, JACK?

HIN IT TO WIN IT

Jesus has just finished international duty with Brazil and he was quizzed about his future while away.

He said: “About my future, it’s still uncertain. I have a contract with City and I have already expressed my desire to the City people and to my agent.

“I have in my head [a very clear idea of] what I want.

“Today, I want to celebrate a lot with City. It’s obvious that I’m very happy here. Tomorrow, if everything goes well for me, my wife and our family, [daughter] Helena will come to the world.

“So, I have to take advantage of this moment. Then, think about the team, smile at the team again. And, on vacation, I [will] decide about my future.”