MANCHESTER UNITED have been handed a transfer boost as target Aurelien Tchouameni’s move to Real Madrid has been held up, according to reports.

Monaco midfielder Tchouameni, 22, is due to complete a transfer to Real although there are complications over a tax payment.

ESPN report that the Champions League finalists are expected to demand Monaco pay the whopping 24 per cent in taxes.

The Spanish treasury consider the Principality of Monaco to be a tax haven and therefore request the extra chunk of cash.

The report says that just over £10million is owed, and the Spanish giants don’t want to pay it either.

United, Liverpool, Arsenal and Chelsea are among the teams who had been targeting the highly-rated midfielder. 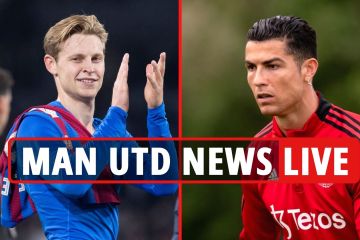 Get Liverpool at 30/1, or Real Madrid at 40/1 to win the Champions League title

Madrid are hunting for high-profile summer signings after being snubbed by Kylian Mbappe on Saturday.

And it is claimed that the Spanish club has been in contact with an offer on the table.

The LaLiga champions are prepared to pay around £68m to land Tchouameni, who joined Monaco for £16m from Bordeaux in 2020.

The talented Tchouameni has been wowing scouts all over Europe with his performances in Ligue1.

FROM RASHER WITH LOVE

He has been in terrific form this season, scoring five goals in 50 games for Monaco.

The tenacious midfielder has also become a regular in Didier Deschamps’ international XI.

And Tchouameni is seen by many as a future global superstar.

His ability was underlined earlier this month when he netted two stunning goals in a win against Lille.