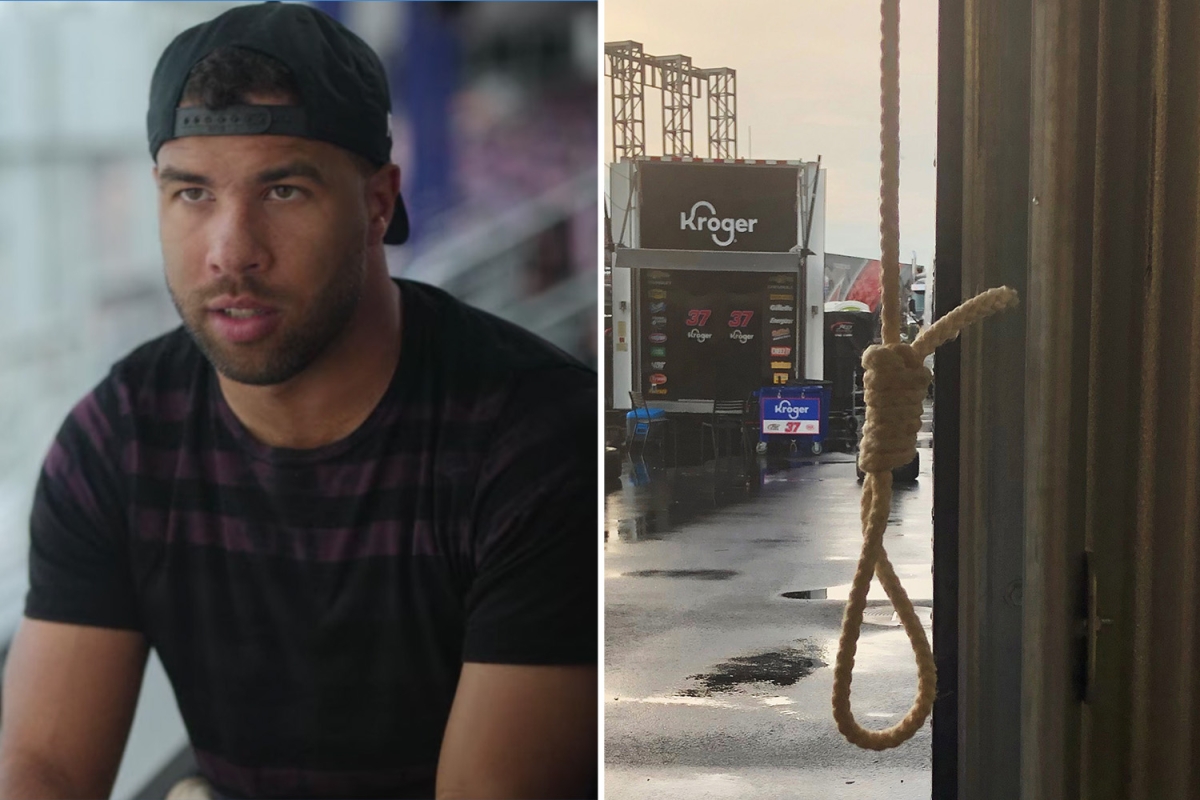 THE noose found in Bubba Wallace’s garage before a NASCAR race in 2020 was real and not a “hoax” concocted by the star, an FBI agent who investigated the incident says.

Speaking in the forthcoming documentary series RACE: Bubba Wallace, FBI Agent Stanley Ruffin dispelled any speculation that the rope – which resembled a hangman’s noose – was planted by Wallace or a member of his team.

“It wasn’t a hoax,” it was real, Ruffin said. “And Mr. Wallace had nothing to do with the placement of that noose.

On June 21, 2020, Wallace was initially believed to be the victim of a hate crime after a rope fashioned into the shape of a noose was found hanging from his stall at Alabama’s Talladega Speedway.

The discovery came at the height of a national racial reckoning following the police killing of George Floyd in Minnesota, and the murder of Ahmaud Arbery in Georgia.

It was the death of Arbery, and the shocking video of him being gunned down in the street as he jogged through a neighborhood near Brunswick, that inspired Wallace to use his platform to demand change and advocate for equality, he reveals in RACE.

Shortly after watching the video, Wallace donned a Black Lives Matter T-shirt on the track before a race and successfully lobbied for NASCAR to ban Confederate Flags from being flown at its events.

Wallace received an onslaught of backlash for advocating for the flag ban, with some fans claiming it’s a crucial part of their southern heritage and therefore NASCAR, a sport with deep Southern ties.

Two weeks after the flag ban was enacted, the noose was found inside Wallace’s temporary garage by one of his pit members.

NASCAR President Steve Phelps alerted Wallace to the noose, and the driver lodged a series of emotional phone calls to various family members, including his estranged father, who advised him to buy a gun.

A media frenzy ensued after NASCAR released a hastily authored statement saying it had been left “angry and outraged” by the “heinous act”.

Wallace also posted a statement to Twitter, writing, in part, that the “despicable act of racism and hatred leaves me incredibly saddened”.

NASCAR’s president, Steve Phelps, called for a full FBI investigation into the incident and within 24 hours, 15 field agents descended on the Talladega Speedway to probe the noose’s origins.

The following day, before the race was due to begin at Talladega, all 39 other NASCAR drivers pushed Wallace’s No. 43 car to the front of the grid in a show of solidarity.

Dozens of pit members also marched in a procession behind them, reducing Wallace to tears.

However, within two days, agents with the FBI in Birmingham, Alabama had been able to determine that Wallace wasn’t the victim of a hate crime as NASCAR had prematurely suggested.

Instead, the bureau found that the alleged noose was actually a door pull rope fashioned like a noose that had been there since at least October 2019.

Both Wallace and Phelps voiced relief over the FBI’s findings, but maintained the rope was fashioned into a noose – and that symbolism alone is problematic.

The hangman’s noose is connected to lynching in the United States and is considered a symbol of historical violence and racism against black Americans.

Speaking on the forthcoming Netflix documentary, Phelps says: “You can call it a pull-down fashioned as a noose – it’s a noose.

“The symbolism of the noose was the issue.”

Phelps said NASCAR conducted a thorough sweep of every garage area in all 29 tracks at which it races, a total of 1,684 garages.

During that probe, they found only 11 garages used a pull-down rope tied in a knot, and only one of those was tied into a noose – the one found in Wallace’s stall.

The noose wasn’t in the garage prior to the October 2019 race weekend, however, it’s never been determined who tied the rope in the way it was or why it was done.

The backlash to the FBI’s findings was swift, with already enraged critics of Wallace’s accusing him of staging the entire incident as part of an elaborate hoax.

The star’s manager told Netflix that Wallace and other members of his team were getting “death threats left and right.”

Then-President Donald Trump added fuel to the fire, by accusing him in a tweet of orchestrating the entire incident to boost his career, despite Wallace never finding or even seeing the noose.

“Has @BubbaWallace apologized to all of those great NASCAR drivers & officials who came to his aid, stood by his side, & were willing to sacrifice everything for him, only to find out that the whole thing was just another HOAX? That & Flag decision has caused lowest ratings EVER!” Trump wrote.

NASCAR increased security around Wallace in response to the slew of death threats.

Carter told Netflix that during the fallout, she grew increasingly concerned about her and Wallace’s safety.

She said every time she came home, she’d quietly sweep each room, fearful that someone seeking to do harm to them may have broken in.

Reflecting on the incident in RACE, Phelps said he has no regrets over the way he and NASCAR handled the incident, insisting he’d do it all over again if he had to.

RACE: Bubba Wallace is a six-episode series coming to Netflix on February 22.

The docuseries explores how the events of 2020 reshaped Wallace personally and professionally, and the pressure he faced during the 2021 season after he signed to Michael Jordan’s racing team, 23XI Racing.

The noose, it was determine, was actually a garage pull-down rope[/caption]

Wallace said he was fearful for his safety[/caption]

RACE: Bubba Wallace will air on Netflix later this month[/caption]